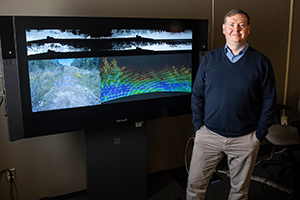 The research task group is part of the NATO Science and Technology Organization’s applied vehicle technology panel. Carruth said the ongoing work with NATO brings together advances in virtual environment and mobility modeling.

“With mobility modeling, it was mostly about dynamics between the tire/track and the terrain it’s driving on,” Carruth said. “With autonomy, you have more questions about the environment and need to account for things such as trees, people, animals and other obstacles. We’re trying to take two domains that have advanced a lot over the last 10 or 15 years and bring them together to improve off-road vehicles.”

At CAVS, researchers use the MSU Autonomous Vehicle Simulator to test navigation software in virtual environments. Recently, MSU acquired 50 acres adjacent to CAVS to also test autonomous vehicles in a variety of physical off-road environments. The center recently was awarded over $3 million from the U.S. Army Engineer Research and Development Center to support the Army’s ground mobility research.

“Off-road autonomy is a new space that’s being created, and we’re right there at the forefront,” said CAVS Executive Director Clay Walden. “It’s invaluable to have Dr. Carruth being involved with the NATO working group, which allows us to better see the vision for future military research and puts our work in mobility on the international stage.”

Carruth led two NATO sub-groups in 2019—one focused on virtual environments and sensors, and another focused on benchmarking modeling and simulation tools. He said the benchmarking group will help determine gaps in current simulation software. The group plans to test autonomous vehicles in the real world and compare their performance to the modeling tools. Starting this year, Carruth is leading the organization of a competition designed to compare performance of different autonomous vehicle modeling and simulation tools.

“Once we can show that the modeling and simulation tools work, we can help set standards for them,” Carruth said.

“It is critical to set up standard methods and tools for assessing military autonomous vehicles and be able to confirm their ability to fulfill strategic maneuvers and wider operations in a quantitative manner, especially since the military context provides extremely challenging and rough situations,” Jayakumar said.

“Given that this activity is likely to result in a long-lasting methodology and/or tool similar to the current NATO Reference Mobility Model (NRMM), which is widely used in military acquisitions by NATO member nations, such development will be a valuable investment for the future. The leadership and contributions provided by MSU’s Dr. Daniel Carruth are extremely critical to the success of the NATO Task Group.”

Carruth’s research interests include modeling and simulation of human interaction with autonomous vehicles, as well as the study of human task performance in law enforcement, military and industrial work. He earned his doctorate in psychology from MSU, in addition to a bachelor’s in degree in computer science.