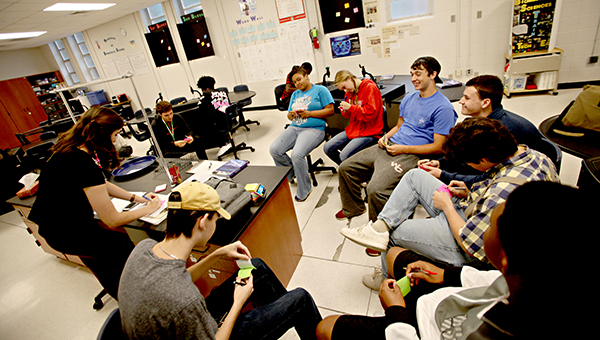 Through the new career academies at Vicksburg and Warren Central, students in the ACME (Architecture, Construction, Mechatronics and Engineering) academy were able to enroll in an Introduction to engineering class being jointly offered by MSU and Alcorn.

"This is the exact course they teach to students on campus for the intro to engineering course on the chemical side," Michael Hamilton, an MSU engineer at ERDC who is one the course instructors, said. "The only slight difference is we decided to use a different book than the one he uses on campus."

Students enrolled in the course are considered to be MSU students and will even be given official student IDs. At the end of the course, they will receive full college credit for the course through MSU or Alcorn and will be able to skip the class if they enroll in their chosen school's engineering program.

"That was a really big deal," said Sam Greer, a senior at Warren Central who is enrolled in the course, of the opportunity to earn credit. "I didn't want to put myself into a class knowing it wasn't going to benefit me as much as it could have. Having the credit offered really did push me over the top to wanting to take the class."

The implementation of the course this year followed two years of work between VWSD, Alcorn and Mississippi State.

"A couple years ago, (superintendent Chad) Shealy called the dean of the school of engineering at Mississippi State," Lucy Derossette, VWSD's director of innovations, said. "Once he got to Vicksburg and realized what a big engineering community this was and everything that was going on at ERDC, he realized he needed a pipeline with Mississippi State to get our kids enrolled in Mississippi State and get them back to ERDC."

Derossette said they expected to have to sell MSU on the idea, but from the first meeting MSU was fully on board and began working to make the class a reality.

"Dr. Keith, the dean of the school of engineering, had every major player at the table and they were actually selling to us why they needed a class in Vicksburg," Derossette said. "They showed us that the number one employer for their engineering students is ERDC. They really want that pipeline to go from Vicksburg Warren to Mississippi State and back to Vicksburg at ERDC."

To enroll in the course, students must have scored at least a 17 on the ACT and have already taken or be currently enrolled in chemistry and calculus. The course serves as the foundational course for engineering at MSU and introduces students to the diverse field before they have to choose their area of study.

"They are going to learn the fundamentals of engineering concepts," Hamilton said. "That includes an introduction to all the different fields of engineering as well as a design concept, such as what is the appropriate way to set up a problem, define the problem, identify solutions and come up with results based on scientific or mathematical principals. After we go through the philosophy of being an engineer, we conduct different projects."

The course meets every Tuesday and Thursday at 7 a.m. at the Hinds Vicksburg campus during the fall semester. The goal by the end of the semester is for students to have a better understanding of the field of engineering and all that it entails so they have a jumpstart on picking their discipline when they enroll in college.

"For one or two years now, I've been interested in the general STEM field. Engineering has been talked about a lot in this town so I figured I would give it a try," Greer said. "I think it will really give me a broader view of what all there is available and the different disciplines that are offered in different places. Really, the real world applications and how getting a degree can actually impact your career."